It is crucial when setting up the putter to line the ball upright in the center of the sweet spot. The focus is then to ensure the putter head returns to this exact position when impacting the ball. If one can achieve that, the line of the putts will improve and the pace will become more consistent. The ball will ultimately have a better roll and thus less side-spin. Putts with pure roll tend to fall in rather than spin out when they hit the edge of the cup. If one makes contact with the wrong part of the putter (outside the sweet spot) the putter will either open or close at impact and this will add to the side spin of the ball. This twisting of the putter results in a draw or fade spin which causes the ball to seem as though it was pushed or pulled. This is due to a phenomenon known as the Magnus Effect which is illustrated below. 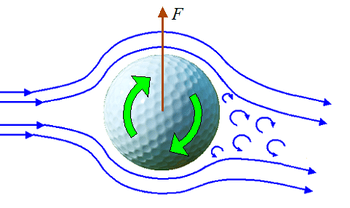 When putting most golfers impart a spin to the ball without realizing it. Because of this, the ball will have a faster windspeed on one side, which causes low pressure. On the other side, however, it has a slower wind speed, which causes higher pressure. This means there is more air pressure on one side than the other which pushes the ball and results in it curving to one side, instead of moving in a straight line. Because of rotation and movement, the air expansion on both sides of the ball is different, so the Magnus Effect appears. Striking the ball fractions of an inch away from the center of the putter face will damage distance control and speed because it reduces the efficiency of energy transfer from the clubhead to the ball. If one doesn’t consistently find the sweet spot, the energy transferred to the golf ball will vary from one stroke to the next.
« Putt like Shoot
Putting Paths »
목록보기
Powered by KBoard